What a week!  I have to say I am tired.  I took an overnight trip with my daughter to the city.  It was good to have the time with her and Thomas.   It was good to get home though.  I am truly done with the city it seems.

Some of the ways I got ahead,  built up the pantry and the garden this week were:

Our Bantam hen hatched five chicks.   She sat on some of the layers eggs that I switched out with her eggs that were not fertile.  I did not think they would hatch and almost collected them to bury them in the garden!  When I got back from Adelaide I heard little "cheep cheep" noises and investigated!   At that stage there were four chicks.  They were already following the hen around.  In the evening I went to check that they had all gone to bed in the hen house.  No.  The hen had left them and I looked for her back in the nest.  When I did I found no hen but an egg was just hatching!  It had been a warm day.  I guess warm enough that this egg still hatched even with no hen still sitting on it.   So there I am crawling around in the hen house catching all the chicks which I put back into the nest.   They made a lot of noise and the mother came and sat back on the eggs and with the chicks.   So I hoped for the best.

The next morning I had five little chicks.  The Mother seems to have lost her mind as she leaves the chicks and goes to bed a night without them.   They would not survive the night so every night I catch them all and put them up in the coop with her and she keeps them warm.  I am generally in my nightie down in the hen house about 7.30 pm hoping no one comes in the driveway. As a result of this circus the chicks are tame and used to being picked up now.  They are so cute! 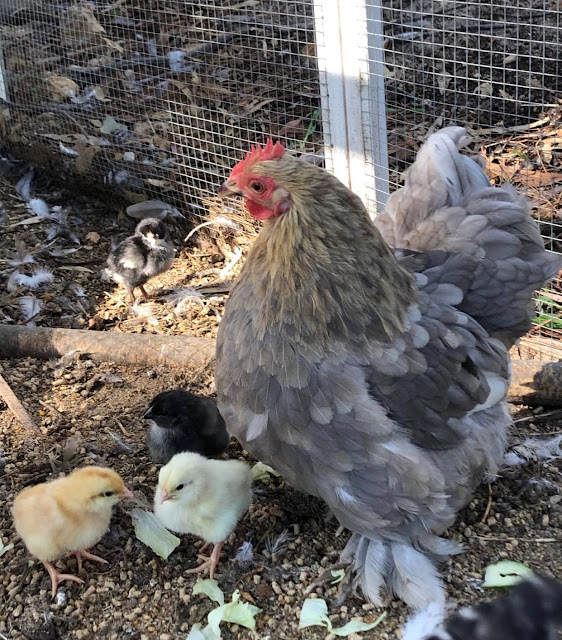 I made four dozen sausage rolls.  I froze most of them, adding to my new freezer of ready made meals.
My friend Wendy gave me Zucchinis.  Two really large ones were grated and added to my Spaghetti Bolognese and cooked in.  This is really good, everyone loves it and a lot of extra veggies. 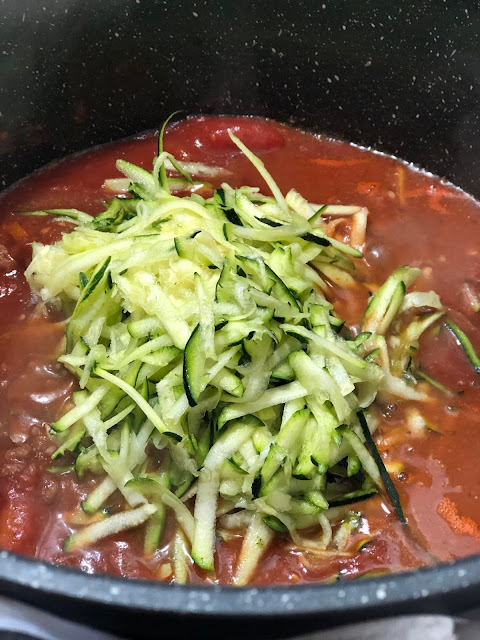 I had Broccolini that was going to get away from me so I blanched and froze into four double portions. 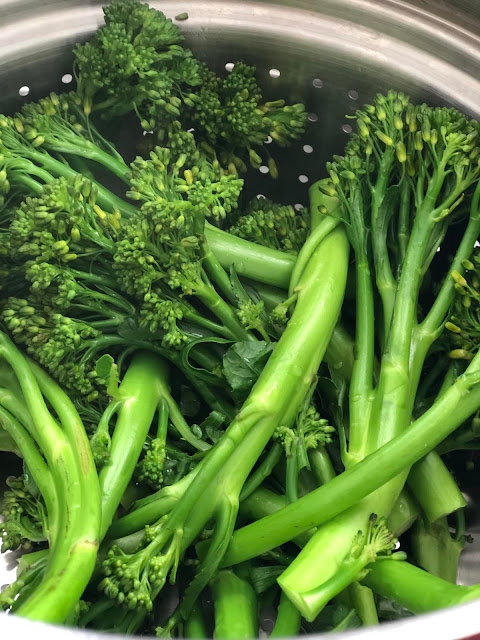 My own Zucchini are really growing.  Now to see if they produce! 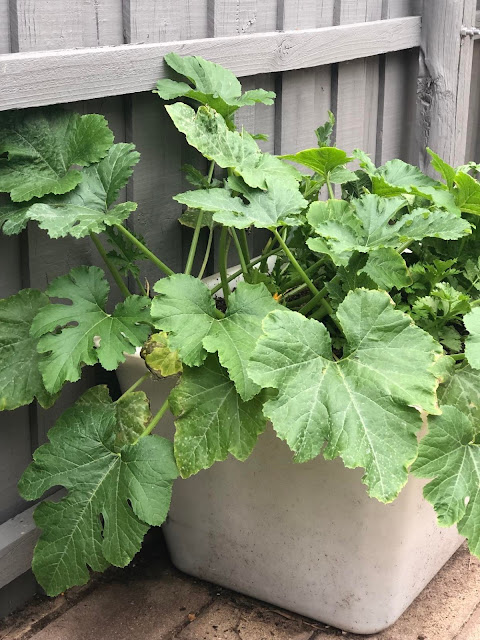 I made gluten free scones and two big quiches.  Then a big banana cake to use up six bananas. 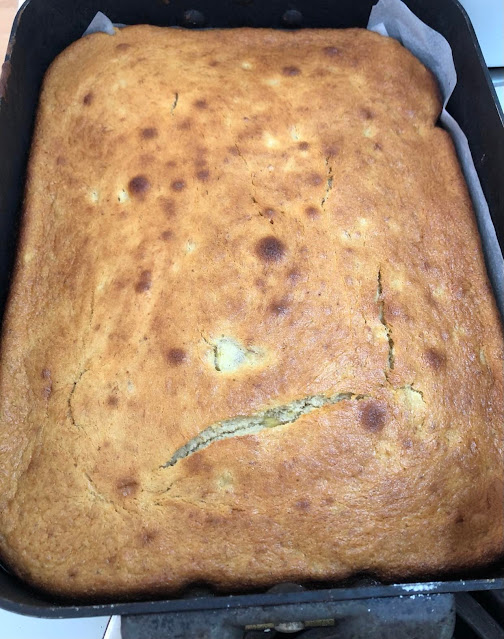 This is iced now to take for the girls school lunchboxes.
This week I had more bulbs come up.  We call these Elephant Ears.  I dug some up at an old deserted homestead last year when they were just the big board and curved leaves that come out of the ground.  Eventually they died down so I didn't know it my transplant had really worked. Until now! 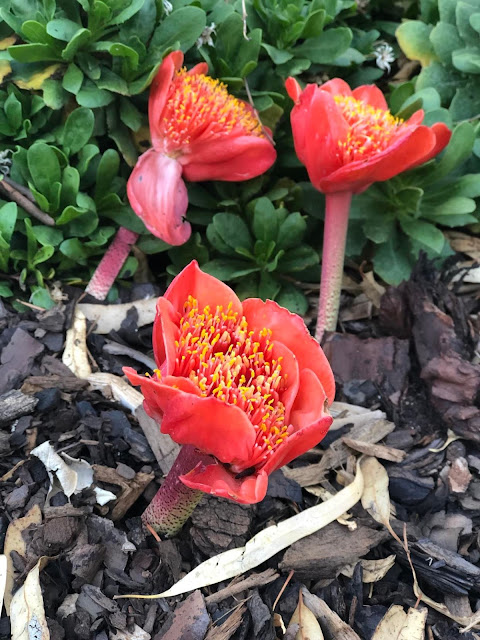 These might have been helped by some rain we had early in the week which was just wonderful.
I made quite a few cards, some for a trade, some for gifts and some to use. 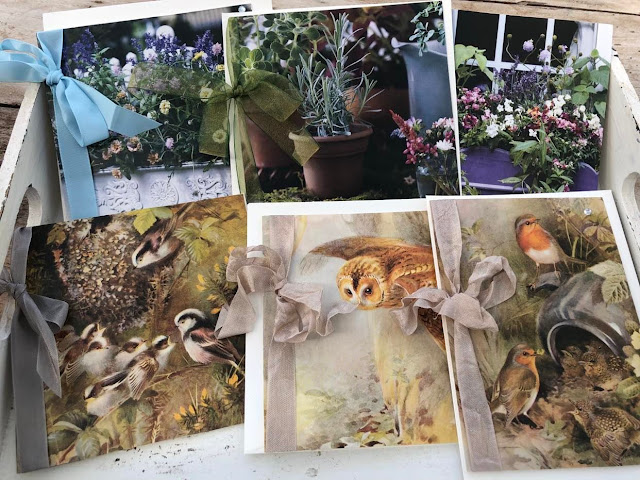 Near our back door there is a closet that had hanging space only.  It became our place to dump all kinds of stuff and my place to put things that I wanted to donate or give away.   Over time this became a major mess.  I decided to empty it out and ask Andy if he would fill it with shelves.  He got right to it and it is amazing!  The shelves are deep so I am using tubs which I will label and be several deep. 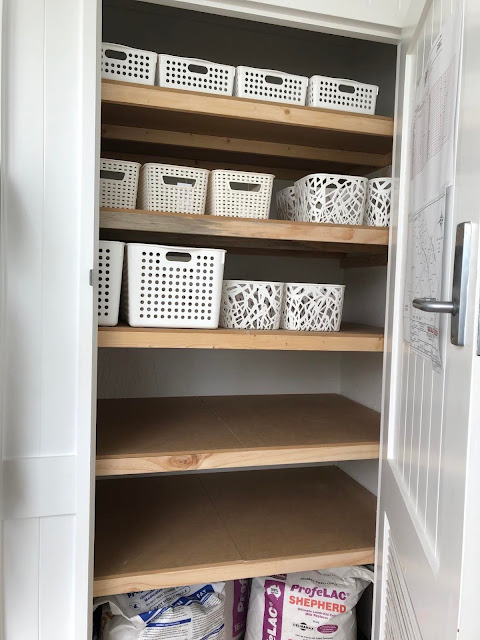 The bottom houses lamb and calf formula.  I stocked up on those.   So now to put it to good use!  My animal pantry has been crammed full of things that don't belong there.   I can get much better organised now.
A You Tube channel I like is Prepsteaders.  There has been a series I have been watching and the problem of lack of storage space was addressed.   We were given a task... to look at all the containers within our homes,  especially containers with lids.  How many do we have that are sitting empty?  They could be filled with water or dry goods.  If we are short of space this is space that is wasted!   I began to mentally go over all my jars and plastic containers... some I want to keep empty ready to can or make jam.  But then it stuck me how I have shelves and shelves of huge old canning jars that my neighbour gave me.  The top shelves of all my kitchen cupboards are full of them!  I have a fair few rings and lids also.   At one stage I set some to good use and used them for storing flour, rice, sugar etc.  so I have proven they are excellent for storage.  I opened my cupboards and checked for lids.   I had over 100 jars and lids to match. So why are they sitting empty?  Good question!   Saving my smaller jars (for my pears and apples)  I began to work on the project of filling these tall jars.  I found one takes a kilo of rice exactly.  (That is 2.2lb) 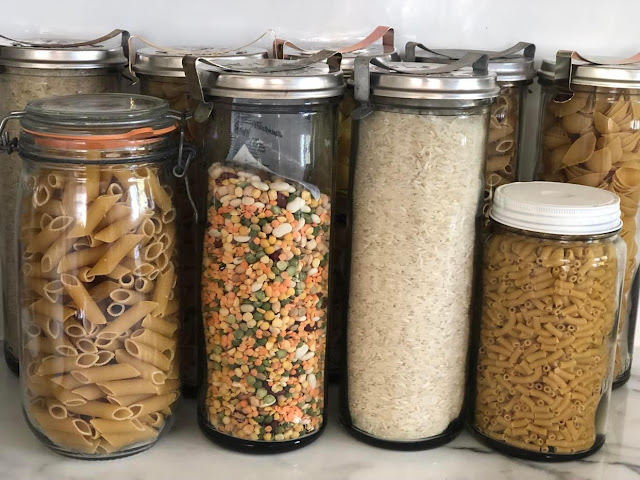 I do not need to store water as we already store huge quantities of water outside.   But I can certainly fill all these idle jars.   What containers do you have sitting empty in your home that might be used for storing long lasting goods?
The duckpond/trough I got from Mum is planted up, at least partly.  I sat another planter on top for Strawberries. 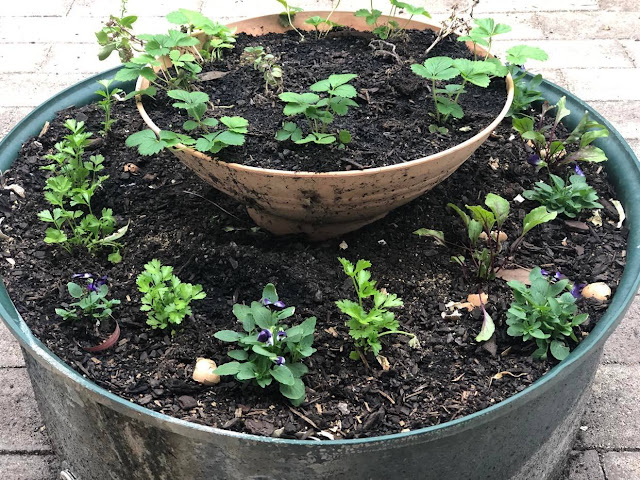 My chicken feed was stored in large plastic bins.  I found mice had chewed their way in.   Now I have big old cast iron pots that no mouse can get into! 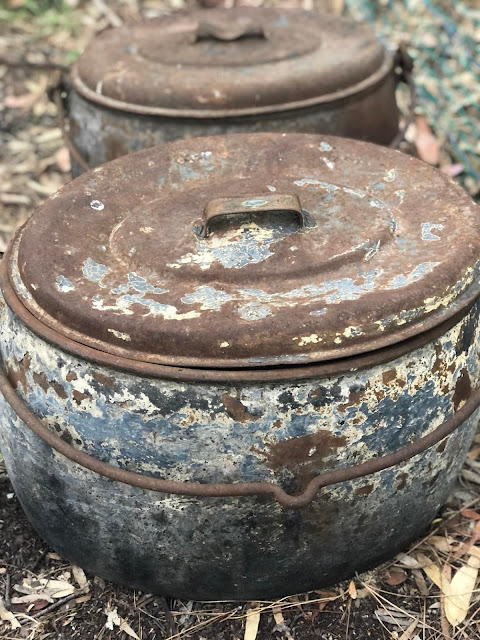 My Dad actually used to cook in these. Now they are in use again.
Chloe was doing an online grocery order.  She messaged me saying "Mum, the store is really bad.  They don't have any..."  and she began to list no sugar (of any kind) no toilet paper, no garbage bags, several baby items she wanted and more.  I went online to do my order and found the same.   This was by far the hardest week availability wise here.  Already we have formed a shopping team.  Mum arrived here with baby items for Chloe,  we both had plenty of sugar stored.  I am travelling tomorrow and know what she is needing.  We all are pretty familiar what each household uses and what to watch out for.  Between Mum,  the girls and us we cover five towns fairly regularly.   There are things Mum can't get in her town but I can get them in mine so I shop for those items for her.  So having a team is a big help.
I feel better being busy doing what I CAN do.  Each time I see news that is concerning (and there is plenty of that) I try and think of what we can do that will help our family.    I don't need to list items of concern here as we are all familiar but one thing that was striking was our Gov said,  out loud,  that Australia is at risk of conflict and as a result 2000 US troops are coming to the Northern Territory.  I had to triple check this was really happening.  Well, that was sobering.
Another channel I like to watch is Appalachia's  Homestead.  She was saying if you have people who discourage you or belittle you for homemaking, building up your pantry and growing your food,  you just do not need these people!  They will not be helping you when you need help either.  They will not be feeding your kids.   What is their motive anyway for discouraging you?  If you have this problem then go listen to Patera she can help you out better than me.
How did you do this week?  I hope you had plenty of great opportunities come your way.  xxx 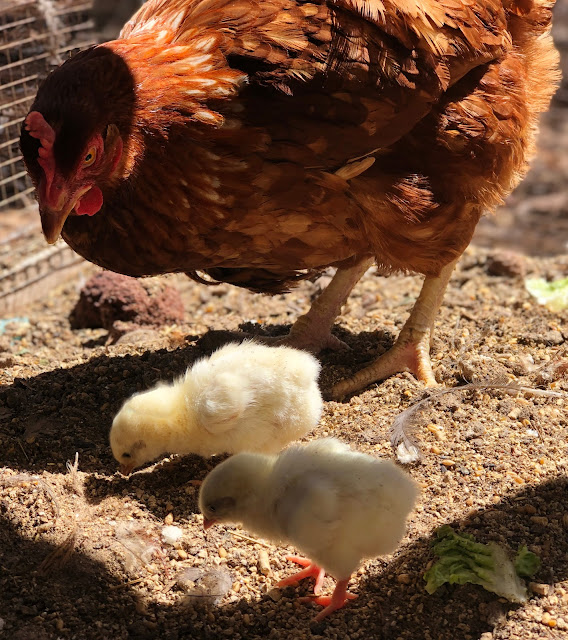